10 May Chlorine Absorption from shower water

Posted at 07:19h in Blog, Water Filtration by Erin

Those relaxing, hot showers you love to take may be hazardous to your health!  Studies on the health hazards of chlorine added to our public water supplies have been conducted for decades and many of them have caused scientists to conclude that there are many significant risks.  In some cases scientists have concluded that there are direct links between chlorine intake and serious illnesses in humans and animals. 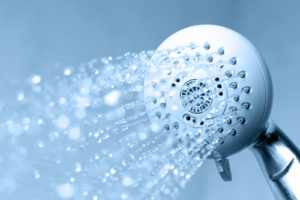 Many people believe they are safe from the hazards of chlorine because they don’t drink unfiltered tap water.  Unfortunately, most people are still absorbing unhealthy amounts of chlorine when they bathe, shower, or swim in chlorinated pools.  In fact, two-thirds of the chlorine taken into the average person’s body comes from taking hot showers.   The reason for this is two-fold.  First, hot water opens the pores and allows water to be absorbed through the skin.  Second, the steam you breathe in while showering can have up to 50 times the amount of chlorine (and other contaminants) than the water coming out of the tap.  Both the inhaled chlorine and absorbed through your skin is then enters directly into your bloodstream whereas chlorine ingested from drinking is filtered by your liver and kidneys before entering your blood stream.  As with bathing and showering, swimming in chlorinated water is absorbed through the skin. So if you own a pool you should consider alternatives to chlorine such as ozanators and ionizer which only require a small amount of chlorine to be effective.

You can protect yourself and your family from inhalation and skin absorption of chlorine by removing the chlorine before it ever comes out of your shower heads.  The Waterboy whole house water filtration system eliminates the harmful effects of chlorine, as well as improving the taste and smell, in the first stage of its 4 stage filtering system.

To learn more about the other health benefits of the Waterboy system visit http://superiorwater.com/how-it-works/